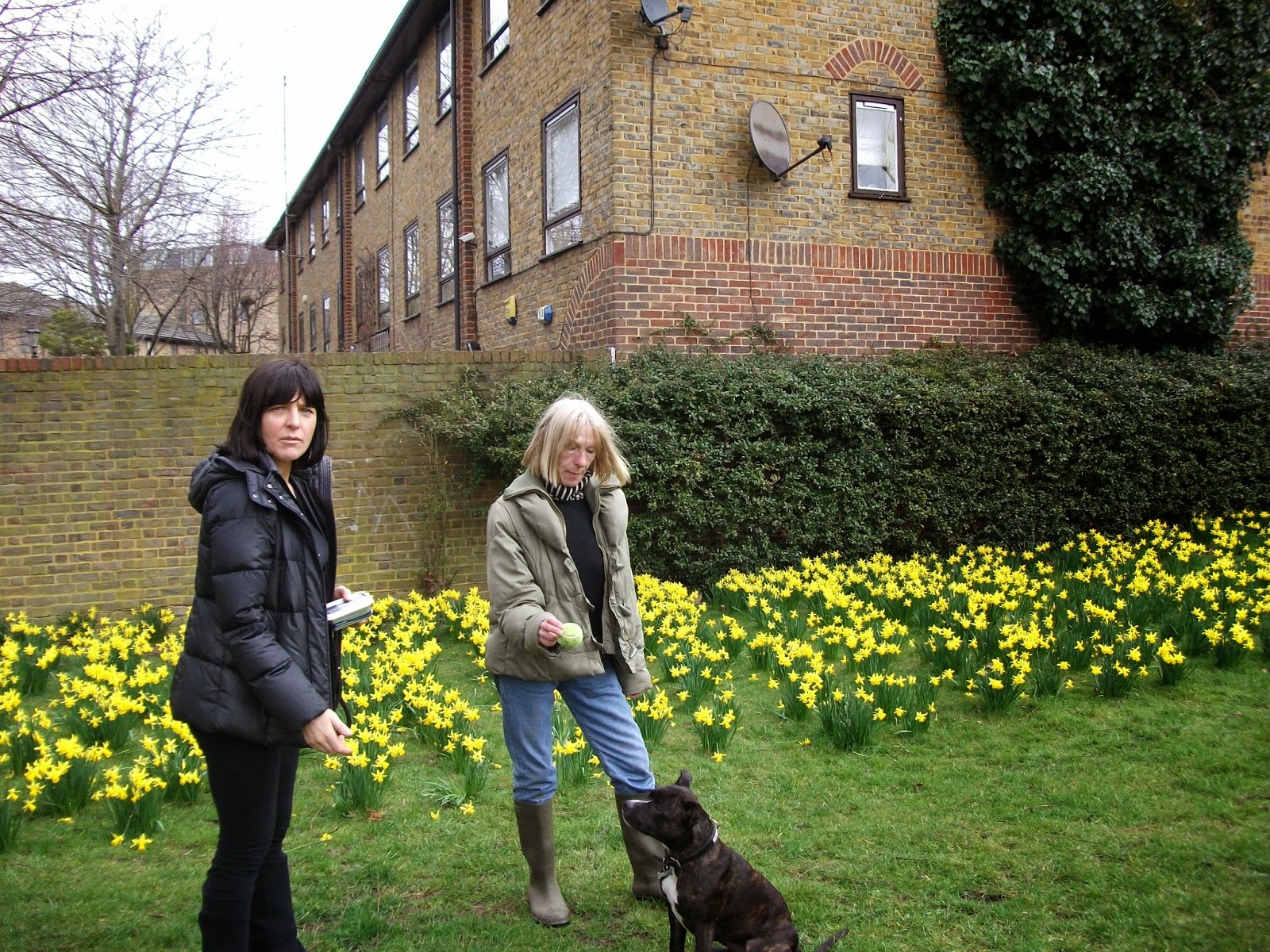 What a great day - well okay a bit wet and a bit windy but a great session with the dogs that braved the aftermath of the storms and though this is the second to last session - two new dogs and their owners joined us - Prada a bullmastiff mix and Holly a cockerpoo!!

Bailey  the staffie was there much improved - well done to his owner Chris (who I am also mentoring in 'working with dogs') - - Oscar well - Oscar was still very verbal especially to the new 'guys' but his owner is sure he is improving!! Good to see Sheba the German Shepherd this week - was 'pulling on  the lead' still but her recall and social skills had vastly improved. The weather was too much for Molly the Romanian and B the staffies owner was not feeling too well (hope you feel better soon).

NB It is always important to 'check' if (especially a pack of dogs are in an enclosure or even just another dog) that they have no 'behavioural issues' if the dog and owner are unknown to you.
Because often the reason why the dog is in an enclosure (Not always - But) because a) it does not get on with others dogs b) it could be too over excited and jump on small dogs c) it does not like other un neutered males or d) the bitch is in season.  It is always best to check first before YOU open that GATE


Back to my class - I really enjoyed today and felt pleased with the positive response especially from the newcomers and being a smaller class today I could give more individual training to each member.

Gave out 'doggy homework' to Prada and Holly - yep and their owners as well - next week being the final class until the spring.
Posted by Canine Culture at 00:22 No comments:

I will be at the Grand Union Pet Boutique @174ShirlandRoadLondonW93JE on Friday 14th February between 1pm-2.30pm to give Free advice on dog behaviour, toilet training, diet,  dog laws and any dog anti social problems.

After a Free consultation if you feel your dog will need a one on one then we can make an appointment for a training session in your own home and local park at a set fee.

You are welcome to bring your dog - have a cup of coffee or tea and a friendly chat about your faviourite pooch!

Look forward to seeing you
Posted by Canine Culture at 22:44 No comments:

Met up with Ghost the White German Shepherd and his owner for a one to one referral  - Poor Ghost is only six months old and yet has had two homes already - thankfully his third owner will never give up on him. Ghost has never been socialised with people or other dogs but he has not a bad bone in his body.  One of his problems is he pulls on the lead and another is he jumps up suddenly whenever he sees another dog - he wants to 'meet and greet' but with no social graces to another dog and a member of the public it can be quite intimidating.  When he actually sat and I held out my hand to him - he licked it.  A Beautiful dog and I am sure that with 3 more sessions Ghost will be a pure pleasure to walk and to interact with other dogs. Next session 18th February.

Posted by Canine Culture at 22:12 No comments:

Email ThisBlogThis!Share to TwitterShare to FacebookShare to Pinterest
Labels: 'Ghost' 'White German Shepherd' 'one to one referral 'pulls on the lead' 'jumps up' 'interact with other dogs'

Dog Classes in the wards of South Westminister

St Georges Square SW1 -Dog Area - another day of dogs, owners and offering advice and training tips to the residents of South Westminster. The weather was not too bad - the rain did start but not for long and I am sure I saw the 'sun' trying to find a way through the clouds.

First on the scene was one year old Lucy a little staffie cross - her owners had only had her a short while and wanted to stop her 'pulling on the lead' - 'help' with her recall' - her reaction to other dogs was very good and she was always the first to back away even when a large white Samoyed stole her ball and 'growled'.  Lovely little girl - I worked with her owners on her recall and we walked round practising 'lead control' regarding the pulling on the lead.  Stella the cockapoo  - well thank goodness she is black - she was tearing around 100mph in the muddiest puddle she could find - But she had to leave early - her owner had got the times wrong - her walking on the lead and recall has improved greatly in just a week. Then there was Boatswain A very handsome 'do what I like' German Wiemar pointer - I spoke to his owner who wanted some advice to 'prepare for the forthcoming baby' (the human kind!!) and her husband will come to the next session next week to get some help with recall and to get Boatswain more sociable with other dogs. And How can I forget 'Tubbs' the leader of the pack of Minature Wirehaired Dashunds -  who liked to 'be very verbal' on entrance to the park or when some other dog dared to come into 'his kingdom'.  A few words about using non verbal and the 'block' for negative behaviour and verbal reward for POSITIVE actions - he is a very clever dog and could become a 'star pupil'.  Frazier the Beagle was listening intently (I am sure) about the 'barking at other dogs' lesson and showed his appreciation by not barking - but his little jack russell companion definitely wasn't having it - But he was quiet - well for a moment or two.

Of course the lovely labs came in - straight up to my bag which one of their owners kindly put out of their way especially with Alfie - he can smell a good treat when he sees it  Didn't see Polly the ridgeback /bullie  today - her owner works shifts but will come to the next workshop which is Friday the 21st February 12.30pm-2pm. Lucy the staffordshire Bull Terrier will be also coming and Boris the patterdale - Also Alfie the little terrier and his 'canine partners in crime' will be coming too. The workshop is giving dog owners and their dogs a more one and one - so I can cover individual 'issues'

I am so blessed to work with dogs and people that want the best for their dogs and also when some local resident came over to me and said ' I can not believe the difference in that dog in one session- Great work' (dogs are very quick to learn - it is US as owners that sometimes find it takes longer to learn!!).  Its always nice to be appreciated  but I too have to thank  Westminster Council  who decided to take action on education and responsible dog ownership and care in the community and help me set these classes up. I just wish other councils would take the same action.
Posted by Canine Culture at 22:29 1 comment:

What a turn out today - considering the wind and the rain - In fact everyone was on time - all the dogs raring to go.

The Dog Enclosure @PaddingtonRecreationGround was wet and muddy but good enough for the class to begin. Bailey the staffordshire bull terrier was bouncy as ever and he was quick to 'sniff out' that I had dog treats in my pocket - following me around like 'a lovesick pooch' - typical male!!

There was Ime the Beagle with her Polish Mum and Dutch Dad  - recall is not really a Beagles priority in life - Food is Ime's first love - and Hugo the pomeranian who definitely was Top dog with his female owners.  'Mouthy' Rudi the English Bull Terrier pup at four months old thought 'mouthing' at peoples ankles was great fun - Sorry Rudi 'Thats why you are here at 'Dog Skool'!! Old Faithfuls Molly the Romanian GSD x and B the Staffie welcomed the new 'doggy members' with a few 'friendly but warning barks' - Oscar the terrier cross was back to his Bark ' Look at me' self. Then Lovely 'Ghost' the white German Shepherd - at six months with two homes already behind him was bouncy jumping up - just wanting to meet and greet - but did not know how to react around other dogs and people.  Not an aggressive bone in his body but I could see his owner was getting stressed and as there is a 'Free one to one referral' place funded by the Ward Budget I have arranged to meet them both next week.

We were meant to practice the recall today but as we had newcomers we did the 'walk to heel' 'how to block 'pulling on lead' and at the end we had recall - which was fun!!  In between we also had a 'free play time' - this is where dogs are off lead (inside the enclosed space) and can let off some energy and then back to 'training mode'

five dogs did 'text' - weather permitting they would return next week and 'Ella's owners are meeting for a one to one. Bassie's owner is away and will be back on the last session.

I was still pleased with the turn out and met a lovely lady called Becky who helps run a rescue who thought the classes were a great idea!